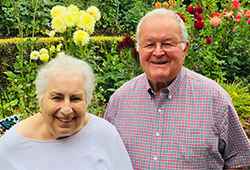 Robert Wright and his wife, Barbara, did not attend Central themselves, however, their son Andrew did as he studied business and education. They saw the impact that CWU had on Andrew and the successful career path it set him on causing Robert Wright to want to show his gratitude to central by giving back.

There is currently a planned a gift of $200,000 set to be used for a scholarship fund in the Wright name for the CWU teach STEM program. Wright and his wife were impressed with what they learned about STEM education at CWU and want to see others experience the impact that Central can have on their lives, as it did on their son.

Wright is a retired high school science teacher and is the past president of the Washington Science Teachers Association.

The Wright's encourage others to consider leaving a lasting legacy for future CWU students through an estate or planned gift.