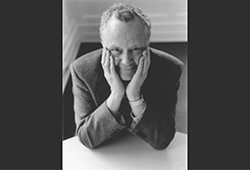 For more than 45 years, William Owen Dugmore served as a psychology professor and counselor at Central Washington University. He earned degrees in biology and psychology and had a life-long interest in the arts and humanities.

From teaching classes in relationships and personal development to his work as a counselor, Dugmore always kept current on the pressure and struggles students encountered and sought to help them overcome those challenges.

"Dr. Dugmore treated everyone he met, especially his students, as though they each were simply perfect the way they were," recalled Melissa Anderson, counselor at CWU Student Medical and Counseling Clinic. "No one was a 'developing student', 'coming into their own', or 'someone with potential.' He believed they were already successful and fascinating just as they were."

"He taught large lecture courses and always sought to create an open and accepting atmosphere where students could safely explore their identities and values," she continued. "The students in his classes often felt very connected to him and to each other."

Dugmore valued his time at Central, both as a counselor and professor, and gave back to the university by educating and counseling students for several decades. He decided he wanted to give back beyond that, creating several endowments in his name to benefit areas at CWU that were most significant to him. The three endowments are as follows:

The William Owen Dugmore Endowed Music Scholarship, established in 2007, supports students pursuing a degree in music. He once said that without music, he felt his life would have no rain for its roots.

"As a young boy, Owen discovered his passion for opera, which as you can imagine, set him distinctly apart from his junior high classmates. His love of books, music and teaching was eclipsed only by his compassion for, and interest in, people," Anderson reminisced.

While Dugmore took violin lessons for 10 years before becoming only a listener, he later said that he continued to find in music what he found nowhere else: an opening to another world that makes this one better.

According to friends, he believed that in music there are meanings and understandings beyond the mundane, reasons to hope beyond hope that felt like a breath of fresh air. He felt that he could feel beyond feeling and discover parts of existence he never would have suspected.

"Owens gift of nearly $1.2 million represents the largest gift in recent history to the University," noted CWU President James L. Gaudino. "It represents the culmination of a life well lived—one that was given in service to, and commitment for the Central Washington University community—its students, faculty, and friends."